Take a globe cut it in halves. Take one half and pop it through so that the outside is now on the inside. Nest this inside of the other. Do this over and over forever and a sphere will turn to a disc with radius equal to that of the sphere. Intriguingly because of the roughness of the disc the surface area is also equal. A string laid flat along the surface from any A to B will be equal to the same segment on a sphere. So much for: “you can’t flatten a sphere!”

After saying or thinking (I don’t recall which) "opening Zone 5” I crossed my eyes for no conscious purpose and saw what I recognized as the Hamsa meaning 5 in arabic. At the time I didn’t know what it was called when I first saw it. To try to see it sit down, put your hands palms up in front of you and cross your eyes. This will cause you to see double. Now overlap the two middle hands and balance your vision until you can merge the thumbs and pinkies of each hand forming Hamsa.

A Star of David, or hexagram, is composed of two equilateral triangles. If you inscribe A, B, C, on one triangles corners, and +,=,spin, on the other triangles corners, then apply the equation, spinning the triangles so that you get A+B=C, SPIN, B+C=A, SPIN, C+A=B, SPIN, then repeating the original A+B=C, the pattern made by the values of the variables will be the Fibonacci numbers.

Hours of the clock are the twelve notes. First the head as the seven white keys, or seven stars.

Next for the five black keys or two witnesses

If a pentagram and an octagram are overlapped they will make the same pattern as the piano of white keys(octagram) to black keys(pentagram).

In order to do two digit multiplication in your head you can use a cross of the numbers with one written vertically and the other across it horizontally. This gives you four corners for the four solutions. I recommend going bottom left product, top right product, sum, bottom right product, tally sum, top left solution, complete.

For the two digit multiplication problem xy*wz you can follow the below diagram (note, some variables may be zero): 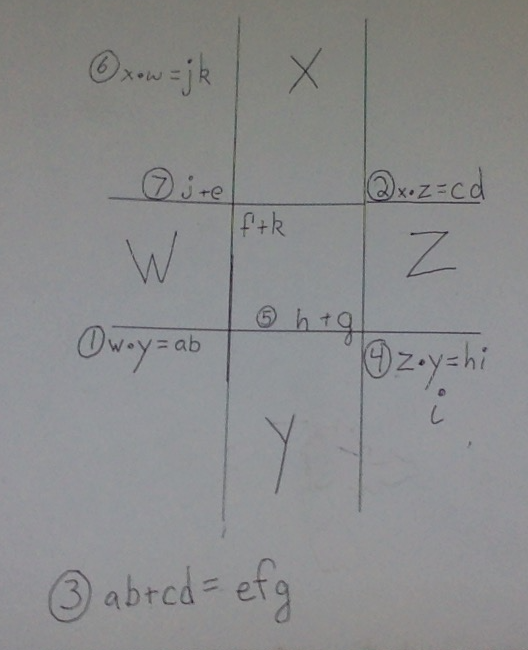 Voila, your solution is written diagonally.

This is basically IOLF if you've ever heard of FOIL (First Outside Inside Last). Incidentally if you foil FOIL you get FIFLOIOL. If you loop this it says I FLO IOLF over and over. So remember to just IOLF it.

John 1:1 and the Fibonacci Word

W (In the beginning was the Word)

And so on! The number of W’s or G’s in each successive iteration count out the Fibonacci numbers, and the ratio of W’s to G’s is an approximate converging on the golden ratio. An equation of the golden ratio is x=x^2-1. This is very close to a formula of the Mandelbrot x<=x^2-c.